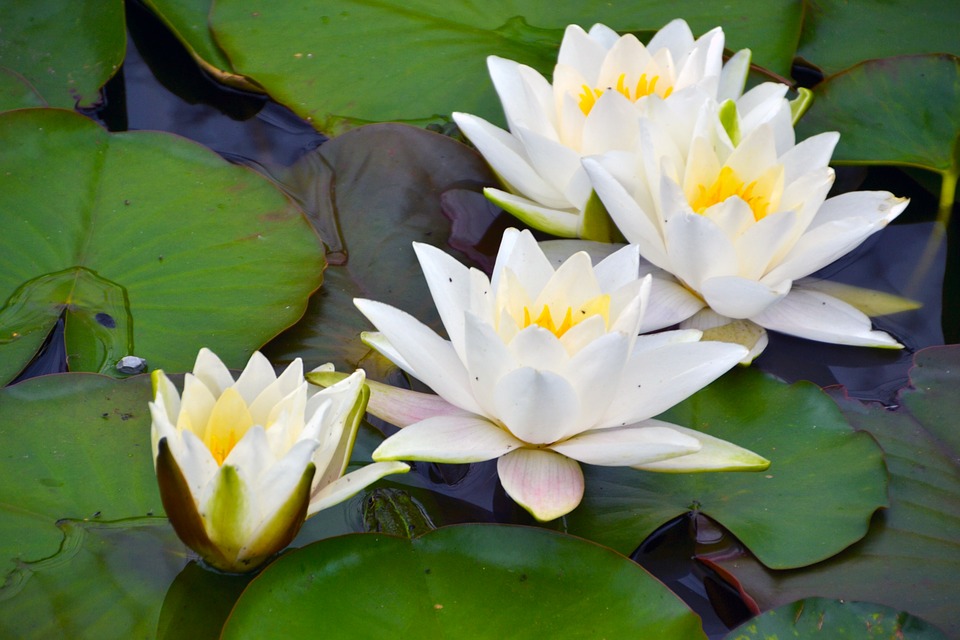 Waterlilies blooming in pools and other sources of sweet water is one of the coolest and most beautiful summer sights, one that can be seen at decorative artificial pools throughout Israel today. Most of these flowers, however, are relatively new arrivals. The two waterlilies indigenous to the land of Israel – the white waterlily (nymphaea lavana in Hebrew and Nymphaea alba in Latin) and the blue waterlily (nymphaea tehola in Hebrew and Nymphaea caerulea in Latin) – only grow in a few places and are in danger of extinction.

The two waterlilies indigenous to the land of Israel – the white waterlily (nymphaea lavana in Hebrew and Nymphaea alba in Latin) and the blue waterlily (nymphaea tehola in Hebrew and Nymphaea caerulea in Latin) – only grow in a few places and are in danger of extinction. The blue waterlily can be seen in the nature reserves at En Afek and by the sources of the Yarkon River, while its white sister grows in the Hula Nature Reserve. They also are part of the collection at the botanical gardens at the Hebrew University of Jerusalem and Tel Aviv University.

Waterlily is the common name used to refer to the spectacular flowers in the nymphaea genus, which includes 46 different species. The name nymphaea was inspired by the nymphs of Greek mythology: the beautiful, elusive creatures that lived among the trees and springs. In addition to its association with the divine, the waterlily was used for healing, decoration, and dye in the ancient world. Images of it appear in ancient decorations and mosaics.

The waterlily attaches to the floor of a pool or fresh water source that usually is not more than 1.5 meters deep. It grows upward, sending out branches with broad leaves that float on the surface of the water alongside beautiful flowers.

Many species from this stunning genus have been cultivated and have become popular adornments for artificial pools and fountains in gardens in cities throughout Israel, such as the pool on the eastern edge of Rabin Square in Tel Aviv. Yet the two species indigenous to Israel have basically disappeared from the Israeli landscape as coastal water sources and rivers succumb to pollution and development. Another difficulty is the coypu (nutria), which was brought to the Hula Valley in the 1950s in the hope of developing a fur industry. The effort to raise them commercially failed, but these large rodents succeeded to escape from the farms, adapt to their new surroundings, and multiply on their own. The coypu’s favorite foods include waterlily roots and branches and the growing coypu population quickly decimated the struggling waterlily population.

Luckily, some waterlilies had been collected for the botanical garden at Tel Aviv University and cultivated there. As part of efforts to develop nature reserves, waterlilies raised in the botanical garden were returned to the wild in the reserves at the Hula, En Afek, and source of the Yarkon River. Protective cages even were built around them to prevent coypus from devouring them.

One more indigenous plant worth mentioning is the yellow or brandy-bottle waterlily (hanofar hasahov in Hebrew and Nuphar lutea in Latin). It is not a member of the nymphaea genus, but of the closely related nuphar genus; both are part of the larger Nymphaeaceae family. Its yellow, ball-like flowers are much smaller than those of the nymphaea genus and like its cousins, the blue and white waterlily, it too is at risk of extinction due to the disappearance of natural water sources and pools.Both nymphaea and nuphar are competitive plants that do not let other plants flourish underneath their leaves. Yet they both also have great ecological significance: the shade that their leaves creates lowers the temperature in the water beneath them, enables the water to absorb more oxygen, and prevents different types of algae from growing. They also create a friendly habitat for a wealth of small fauna, which in turn attract larger animals and thus enrich the biological diversity of the aquatic environment. Owners of ornamental pools will be happy to know that these fauna include goldfish, which usually do not succeed to survive and reproduce in exposed pools, but often thrive under the canopy that waterlily leaves form.