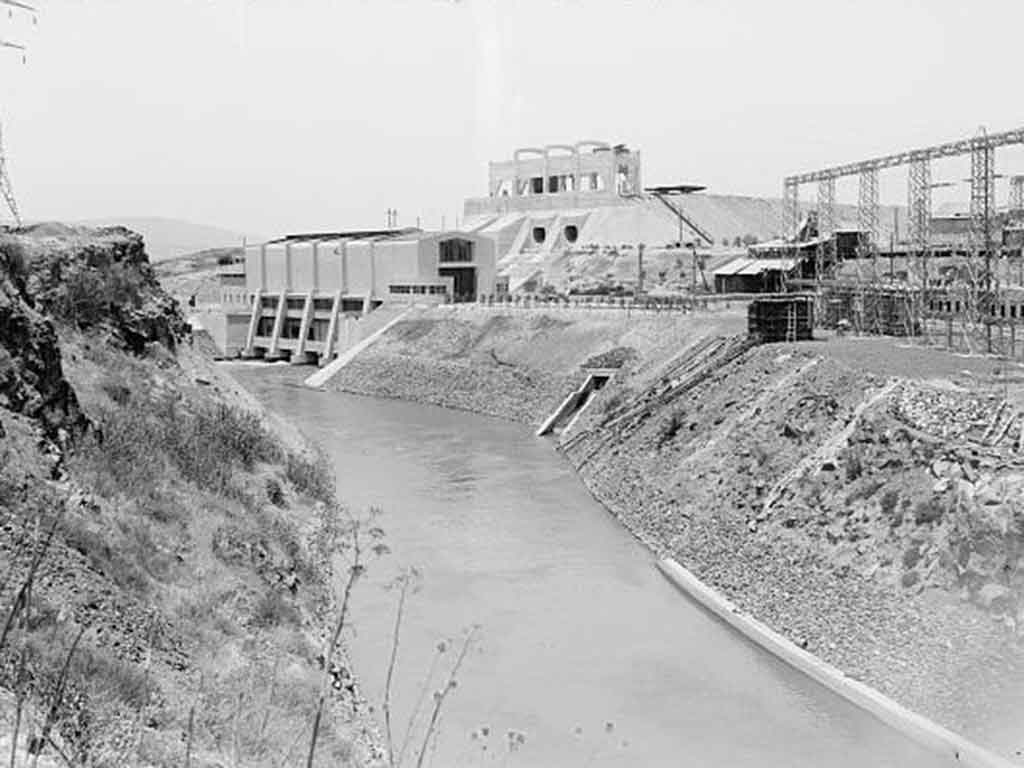 In April 1948, Gesher was the first settlement that had to face the attack of a regular army – the Jordanian Arab Legion. In May 1948, with Israel’s declaration of independence, the settlement was in the eye of the Iraqi invasion.

Following the siege, Gesher was totally destroyed, but its members held out until the withdrawal of the enemy. Upon the conclusion of the war, the settlement moved to a new site.

Today, a museum operates in the historic site. It illustrates life at Gesher in its early days through the old buildings, exhibits, and an audiovisual presentation.

The site also includes the recently inaugurated Gaon Hayarden Promenade, whose circular route overlooks the Jordan River and the Naharayim power station. In the heart of the promenade is the Bridges Lookout, with a view of the three historic bridges that used to cross the Jordan.

Also at the Gesher site: a model illustrating the method of operation of the Naharayim power station, the remains of a caravansary from the Mameluke period, and a British police fortress. One of the locomotives that was used in the construction of Naharayim was completely renovated and repainted, and can be operated for a short trip around the site. Directions: Kibbutz Gesher. Access from Road No. 90, opposite the entrance to the kibbutz.

Castel National Park is located on the ruins of a Crusader castle and an Arab village. In the War of Independence, the site was an important army post, which overlooked the main road to Jerusalem, and bloody battles were fought for control of the Castel. Reconstructed bunkers and trenches can be seen at the site, complete with explanatory signs.

From the top of the hill there is a breathtaking view of the Judean Mountains.

This building was the home of David and Paula Ben-Gurion until they moved to Sde Boker. After their move, they would stay here on their visits to Tel Aviv.
Ben-Gurion bequeathed the house to the State of Israel. The house contains the same furnishings, decorations, and household objects it had when the Ben-Gurions lived there, in addition to exhibits. It was opened to visitors in 1974.

In 1981, the building to the north, the home of labor leader Hillel Cohen, was made part of the museum compound, in accordance with Cohen’s will. This building houses a permanent display on Ben-Gurion and his heritage and classrooms that are used for lectures and seminars on the Jewish people, Zionism, and society.

The museum offers activities for children and youth and has a 20-minute film.

Ben-Gurion’s library is open to the public (by appointment).

This museum features a sophisticated presentation on the Palmach (an acronym for Plugot Hamahatz or Striking Force), the military branch of the Haganah underground organization.

It shows the Palmach’s heritage and role in the War of Independence and the establishment of the State of Israel.

Visitors join a group of young people from the time they enlist in the Palmach, shortly after its establishment, until the end of Israel’s War of Independence. Their fascinating personal story, a three-dimensional display, and special effects bring the documentary material about this period to life.

The tour of the museum begins and concludes in a memorial hall for fallen Palmach fighters.

The museum also hosts temporary exhibits. Additional educational activities, led by museum guides, are available if arranged in advance. The Palmach Museum is part of the Museums Unit of the Ministry of Defense.

This museum is located in the only building that survived after Kibbutz Sa’ad came under heavy attack in Israel’s War of Independence.

The site is devoted to a depiction of the history of the three religious kibbutzim in the area. On the ground floor of the museum is an exhibit of photographs from Sa’ad’s experience in the War of Independence and telegrams describing events in the time of the war.

The exhibit shows the suffering of the fighters who had to spend day and night in the trenches.

On the second floor, an audiovisual presentation is screened; it deals with the atmosphere in the Land of Israel in the time of the war and other topics. The building’s roof affords a nice view of the entire Gaza Strip.

The battle of Nitzanim, whose fallen included three female fighters, inspired the creation of Yad L’Isha Halochemet, a monument dedicated to the women who lost their lives in the battle and to female fighters in all of Israel’s wars.

The monument is part of the Old Nitzanim site, which features an audiovisual presentation on Nitzanim’s heroism in Israel’s War of Independence and on the female fighters.

Visitors can also see “The Palace” – an old Arab orchard house in which the defenders of Nitzanim bastioned themselves, reconstructed positions from 1948, and other monuments to fighters.

The site offers a variety of guided tours in the adjacent Dune Park.

A bronze monument sculpted by Natan Rapaport depicts three Negev defenders. Beside it is the Open Museum, featuring the water tower that was a major lookout point in Israel’s War of Independence and was blown up by Egyptian planes. There are also an Egyptian tank, the first tractor on Kibbutz Negba, and Negba’s original tower and stockade site (the structures were put up overnight to create settlements before the British could stop them).

This site played an important role in Israel’s War of Independence. The museum focuses on the deeds of the brigade in 1948 and also on the new Givati Brigade.

It offers a selection of videotapes, and the memorial room has a wall with the names of the fallen of the brigade and a computerized system that provides information about them.

The museum offers guided tours to Givati sites in the area.

The hut that was the desert home of David Ben-Gurion, first prime minister of Israel, and his wife Paula has remained as Ben-Gurion left it when he died (1973), as he requested in his will.

The area around the hut is well tended. In addition, approach paths have been paved, and plazas for presenting explanations have been built. Sayings from David Ben-Gurion’s philosophy and pictures illustrating early life on Kibbutz Sde Boker have been incorporated in the area.

In the heart of the hut is Ben-Gurion’s workroom, containing part of his library. In this room, he wrote his many books and articles.

In the next hut, which was used by his bodyguards, is an exhibit showing David Ben-Gurion’s special attachment to the Negev.

This museum is devoted to the Holocaust, the partisan battles in World War II, and the fighting in the area of Yad Mordechai during Israel’s War of Independence.

The section depicting the Holocaust chronicles the rise of the Nazis to power, the life of the Jews in the ghettos, the Warsaw Ghetto uprising, and the path to the crematoria of Auschwitz.

The museum narrates the resistance
of companies of Jewish partisans in Nazi-occupied territory, the clandestine immigration to the Land of Israel, the establishment of 11 settlement points in the Negev (1946), the battles against the Egyptian invaders, and mainly
the bitter fighting for Kibbutz Yad Mordechai.

Beside the museum is a monument to Mordechai Anilewicz, leader of the Warsaw Ghetto uprising and the person after whom the kibbutz is named.

The scene of the battle for Yad Mordechai is re-created in the spot where it took place.